How to Make Desserts for Easter

I have learned how to make many desserts for Easter which are traditional in various countries. You will find each of the Christian countries which celebrate the resurrection of Christ to have special cakes, bread and other desserts for this very special holiday. Here in America we have a wide range of these recipes, many going back to the homeland of our immigrant families.

For instance, if you are learning how to make desserts for Easter from Greece you might find one called galaktoboureka. This is made with sheets of phyllo dough and layered with custard. Being one of the favorite desserts of the Greek cuisine, it is used to celebrate many holidays or special occasions. Although it is a little time consuming to make, it is well worth the effort. It should be eaten while fresh but that is no problem; I cannot believe it could last long around anyone who likes desserts.

In many countries, pies and tarts are the primary recipes when learning how to make desserts for Easter. These are most likely to be made with a filling of egg custard or cheese. In Ireland, one might be flavored with Irish coffee or whiskey and in Britain you might find one filled with lemon curd. I have found that in many countries it is common to flavor the desserts with lemon; that is also with the pies and tarts.

My five cream pie recipes have become my traditional desserts for Easter. Years ago I started making these for Easter for a couple of reasons. I always had so many recipes to make throughout the year that the creamed pies always came about on Easter by accident. I would start by thinking of making only two or three but my pie crust dough would make five pies; I simply started filling all five crusts.

For my desserts for Easter, I always make a chocolate cream, coconut cream, lemon meringue, butterscotch and banana cream pies. I have already given you my chocolate and coconut, so below I am giving you my butterscotch, lemon meringue and banana cream recipes. These Easter pie recipes quickly became such a hit that the family looked forward to the holiday just to get the pies.

If you only want to make one or two pies, the unbaked pie shells keep well in the freezer. Simply stack the lined pie pans with wax paper between them then wrap tightly with plastic wrap.

HOW TO MAKE DESSERTS FOR EASTER like this
LEMON PIE RECIPE

This is one of the fabulous desserts for Easter the lemon flavor signals that spring is here.

Combine and mix sugar, cornstarch and water in a heavy saucepan.
Combine and beat together in a bowl the yolks with the juice; blend into the sugar mixture.
Place over medium heat and cook stirring constantly until mixture thickens like pudding (about 25 minutes).
Add lemon extract, butter and vinegar; stir to blend.
Pour pudding mixture into baked pie shell; top with meringue.
Bake pie until meringue is golden brown; cool completely before cutting.

This banana pie is also included in desserts for Easter; with its pastel coloring and tropical taste it is so refreshing.

Beat egg yolks in mixing bowl and set aside.
In heavy saucepan stir together flour, cornstarch, sugar and salt.
Gradually whisk in milk blending until smooth.
Cook over medium heat stirring constantly until mixture thickens and comes to a full boil.
Cook mixture 2 minutes longer; remove from heat and stir in vanilla and butter.
Line baked pie shell with a layer of bananas; pour in half of pudding mixture.
Top with another layer of sliced bananas; spread remaining pudding mixture over the top.
Add meringue and bake until golden brown; cool completely.

This pie crust serves as the foundation for many of the desserts for Easter.

Preheat oven to 350F degrees.
Grease bottom of pie pans; not sides.
In measuring combine yolk and vinegar; fill cup to 1 cup line with cold water.
Combine flour and salt; cut in shortening with pastry cutter.
Add yolk mixture to flour shortening mix; stir until blended.
Turn dough out on floured surface and knead until smooth; divide into five balls.
Roll each ball to fit into prepared pie pans; trim around edges and crimp.
With fork pierce holes in bottom of crust and on sides; helps prevent shrinking while baking.
Whip egg white with fork and brush on crust to help prevent sogginess from filling.
Bake crusts until light golden brown; let cool.

This meringue recipe is suitable to top many desserts for Easter; the presentation is great for any special occasion.

Combine water, sugar and cornstarch in saucepan over medium heat; cook until thickened but pourable.
Combine egg whites, salt and cream of tartar in mixing bowl; beat until soft peaks form.
Gradually pour in hot mixture while beating until stiff peaks form.
Spoon on top of pie filling and spread with spatula to sides to seal the edges.
Bake at 350F degrees until meringue is golden brown; cool pies completely before cutting.

This galaktoboureko recipe is an all time favorite dessert in Greece. The creamy custard pie is bake in phyllo sheets of dough which is so familiar to the Greek cuisine. This dessert makes a great addition to your choice of desserts for Easter.

Grease 9 X 13 inch baking pan.
In heavy saucepan heat milk and whipping cream JUST to boiling.
In small bowl combine farina and sugar; gradually sprinkle into hot milk mixture.
Stir mixture with wire whisk while heating to a boil.
Reduce heat to medium low and continue cooking stirring constantly;
Cook until mixture is slightly thickened about 5 to 10 minutes; remove from heat.
In large mixing bowl on high speed beat egg yolks and vanilla until thoroughly blended.
Reduce speed to medium and gradually beat in the farina mixture until well blended.
Preheat oven to 375F degrees.
In the prepared pan, place 1 sheet of phyllo letting it extend up the sides of the pan.
Brush sheet with melted butter; repeat process and lay 5 more layers.
Pour the farina and yolk mixture into the lined phyllo pan.
Cut remaining phyllo into 9 X 13 rectangles (about).
Place 1 sheet on farina mixture and brush with butter; repeat with remaining phyllo and melted butter.
With sharp knife cut top phyllo layer into 2 ¼ inch squares.
Bake 35 minutes or until top is golden brown; pour hot lemon syrup over the top.
Cool at least 1 hour; cut through the layers to serve warm or cold.
Lemon Syrup Recipe:
Cook over medium heat ¾ cup sugar and 1/3 cup water until boiling stirring occasionally.
Reduce heat to low and simmer about 8 minutes until syrup is thickened.
Stir in 1 tablespoon lemon juice.

This is one of the easier to make desserts for Easter. 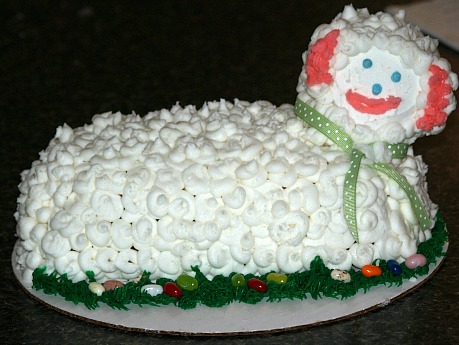 Combine sifted flour, baking powder and salt; sift into large bowl and set aside.
Combine sugar and oil in mixing bowl; beat until blended.
Add egg yolks one at a time beating after each; blend in water, coloring, lemon juice and lemon rind.
Add flour mixture to yolk mixture gradually while beating.
Beat egg whites and cream of tartar until stiff peaks form.
Fold beaten egg whites into batter 1/3 at a time; fold just until blended.
Pour batter into 1 large muffin cup 2/3 full; pour remaining batter into greased and floured loaf pan.
Bake in preheated oven at 325F degrees until pick comes out clean.
Muffin should take about 25 minutes.
Loaf should take about 55 to 60 minutes. 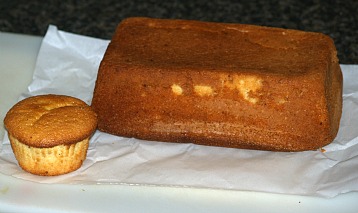 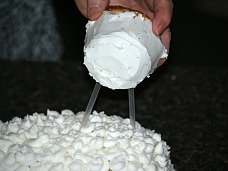