How to Make Chocolate Icing

I learned how to make chocolate icing and found that this creamy texture really added the final touch to a good homemade cake. You can change most any of the cakes simply by changing the icing. You could use a white chocolate icing, milk chocolate, dark chocolate or even the following cinnamon fudge icing; or change to numerous other icing recipes.

If you are learning how to make chocolate icing, needless to say there is more to a good recipe than what meets the eye. This is not to say that I do not love looking at a luscious chocolate frosted cake but there is much more to the frosting. One thing for sure is that the taste of a cake can completely change just by adding icing. 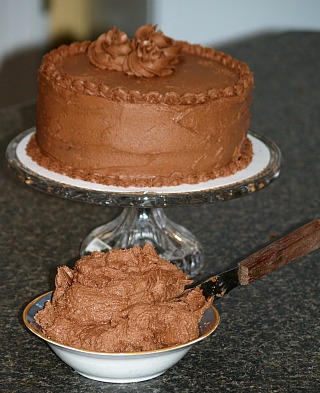 How to Make Chocolate Icing

If you are learning how to make chocolate icing, try adding it to a banana cake; this combination is wonderful. Many combinations like this turn a dull ordinary cake into a masterpiece. Aside from appearance and taste, the frosting will seal the moistness inside the cake preserving the flavor and moistness for a longer period of time.

When learning how to make chocolate icing, for a layer cake it can act as a filling to hold the layers together and as the frosting. Simply spread the bottom layer with the mixture and then place a layer on top; repeat the process if making a three layer cake. Then frost the sides and top making swirls or designs in the frosting if desired.

There are many delicious recipes to choose from and I am sure you will develop your favorites. There are some that are boiled icing (or boiled frosting) and many which require no cooking. Some are made creamy by adding heavy creams, butter and even delicious cream cheese and others which are simple glazes. Any of these can be used for your cupcake recipes.

HOW TO MAKE CHOCOLATE ICING

Combine all ingredients and beat until smooth. If needed add a little more cream to obtain spreading consistency.

Melt chocolate in a double boiler; add butter and melt. Set aside.

In a mixing bowl add the sugar mixture to the chocolate mixture.

Add hot water a little at a time while beating until at a good spreading consistency.

Add vanilla and beat until fluffy.

Combine sugar and water in saucepan; stir to mix sugar.

Heat gradually to boiling point; boil without stirring until syrup threads when dropped from tip of spoon.

Add flavorings and continue beating until desired spreading consistency has been reaches.

The following two frosting recipes may be used as is or may be whipped until they are almost double in volume. Both should be used as quickly as they are made; otherwise they will harden and become impossible to spread. If this should happen the basic thin and thick icing can be reheated to liquefy it. If the frostings have been whipped it must be melted over low heat, chilled and then whipped again.

Combine chocolate and cream in heavy saucepan over medium heat.

Stirring constantly, cook until chocolate melts and comes to a boil.

Remove from heat and cool slightly before spreading; if whipping chill for 1 hour first.

Melt chocolate in top of double boiler over hot water until soft.

Remove from heat and stir in butter; cool slightly before pouring over cake.

To whip chill mixture for 1 hour first then whip until double in volume.