How to Make Irish Potato Recipes

When cooks learn how to make Irish potato recipes, they learn quickly that this vegetable has had a large impact on the people of Ireland throughout the decades. In preparing for St Patrick’s Day, I have been reading and talking to many people of Irish heritage. What I have found is that prior to about the 1600s, food in Ireland was very short, especially for the poor peasants.

Around 1600 potatoes were brought to Ireland from South American to be planted. Amazingly the potatoes were easy to take root and grow with very little labor in the fertile soil and cool moist climate of Ireland.

So many potatoes were grown that it became known as the staple crop. The once starving peasants were not only able to eat now but their health thrived on a potato diet; they were so much stronger than the British peasants.

Potatoes played an important part in the history of the cuisine of many countries like my German background. When I learned how to make Irish potato recipes I found this to be a mainstay to the Irish people. By the 1800s the people in the poorest regions totally relied on the crop for their existence. Many considered them to be bland (Today they certainly are not bland with all our flavoring) but they provided food for their hungry bodies.

Then in the mid 1800s the unthinkable happened to destroy the making of any Irish potato recipes. A horrible fungus had somehow traveled from Mexico to Ireland wiping out the entire potato crop. The country suffered from famine and infestations. Over the next decade hundreds of thousands of Irish people died and many more left the country.

The British government made an effort to help but everything they did seemed to make things worse. Soup kitchens and work stations were set up but quickly ended. No one was prepared to deal with such an emergency of this magnitude. Not only destroying any hope for learning how to make Irish potato recipes, but the famine left lasting bitterness and mistrust toward the British.

As a result of the Irish potato famine, the people no longer totally rely on Irish potato recipes for their food. They are now diversified growing other crops like oats, barley and sugar beets. They also rely heavily on locally grown vegetables like cabbage, turnips, parsnips and carrots. Fish now is a large part of the Irish life as well as cattle, lamb and pork.

Combine raw potatoes and mashed potatoes in a large bowl.

Combine and mix flour, salt and soda in another bowl; add to the potatoes.

Roll dough out in circle ½ inch thick on a well floured board; cut into serving wedges.

Heat bacon fat in a skillet until hot; brown wedges on both sides.

This is one of the Irish potato recipes so good and warming when it is cold and damp outside.

Sauté onion, celery and ham in melted butter in a large saucepan.

Add milk and return to heat; warm slowly do not boil.

Add onions and garlic and sauté until onions are tender 3 to 4 minutes.

Pour in the beer and scrape up any browned bits on bottom or sides of pan.

Make cheese mashed potato recipe and spread over the stew; dot top with pieces of butter.

Bake uncovered for an additional 20 minutes until potatoes are golden brown. 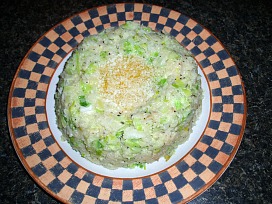 How to Make Irish Potato Recipes

This potato and cabbage recipe is similar to other Irish potato recipes like the Colcannon; the difference is that these potatoes are not cook real tender so they do not mash as creamy.

Trim leeks and chop both white and green; cover with milk and cook until soft.

Chop cabbage and cook for 5 minutes in lightly salted water; drain and chop in small pieces.

Beat potatoes with mixer; add leeks and milk mixture and season with salt, pepper and mace.

As I said, don’t be surprised at any Irish potato recipes you might find. Whatever it is for, the potatoes will give it added texture and flavor as in this Irish potato scone recipe.

Heat butter and water together in a small saucepan; after butter melts stir in sifted flour.

When mixture is smooth, break in the eggs one at a time beating with electric mixer.

Turn dough out onto floured surface and let set to cool; sprinkle with flour, wrap and chill for several hours.

Remove dough from refrigerator and roll out to ½ inch thick into circle and cut into wedges.

Heat a little oil in large skillet until hot; cook scones until brown on both sides.

This is one of the Irish potato recipes which makes a nice presentation to a pork dinner.

Brush with egg yolk diluted with water; dust with paprika.

Brown in hot oven (425F degrees) and serve on plate with sliced pork.