How to Make Raspberry Cheesecake Recipes

Learn how to make raspberry cheesecake recipes and you will love the taste; everybody does. No matter how you put this fruit with creamy delectable cheesecake recipes it is simply delicious; it might be a plain one or chocolate. Settlers brought raspberry seeds with them to the American colonies to start these plants. Later in New York a man named William Prince started a nursery selling these plants so we can thank him for the popularity of these tasty berries here in the United States.

When you learn how to make raspberry cheesecake recipes, like strawberry cheesecakes they are very popular because of the abundance and great availability of the berries. If you ever visit Mount Vernon in Northern Virginia, you will understand and appreciate the impact that George Washington had in promoting this sweet berry. Today raspberries are commercially produced in many of the Midwestern states, New York, Oregon, California and the largest amount produced in Washington State. They are now available for purchase throughout most of the year.

Knowing how to make raspberry cheesecake recipes you might find to be very seasonal; for me it is best to make them in the springtime when the berries are available. I love to walk the mountain areas of Tennessee and in Ohio to collect these berries growing wild. They are so abundant; large bushes grow everywhere and they are so full of berries. Wild raspberries are so sweet and highly perfumed that only a few in a bowl of fresh fruit will make a difference in the taste. The flavor of these wild ones is wonderful plus they are free. Great satisfaction comes from all angles of this project!

This is one of the raspberry cheesecake recipes which requires no baking. The chocolate crusted dessert with raspberry glaze sets up quickly for serving as a special dessert recipe.

Put jam in blender and process until runny; drizzle over whipped topping.

This is one of the raspberry cheesecake recipes made easy with a prepared pie crust. Again a great combination of flavors in the chocolate and berries.

Beat cream cheese on medium until smooth; beat in sugar and vanilla.

Add eggs one at a time beating well after each.

Fold in raspberries reserving a few for garnish; pour mixture into crust.

Combine all glaze ingredients except vanilla in a heavy saucepan.

Stir constantly over low heat until mixed and chocolate is melted.

HOW TO MAKE RASPBERRY CHEESECAKE RECIPE

This is another of the raspberry cheesecake recipes which does not need baking; only the crust. The gelatin helps the dessert to set up in refrigerator.

Bake for 10 minutes then cool.

Remove sides of pan; spread seedless preserves over the top.

Garnish with shipped cream to serve. 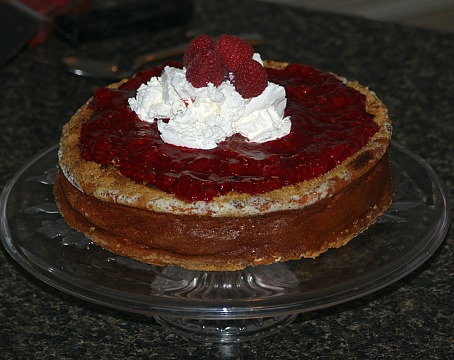 How to Make Raspberry Cheesecake with Raspberry Lemon Sauce

Pour batter into prepared pan; bake for 45 minutes or until lightly brown.

Bake for 5 minutes at 450F degrees; remove from oven and let cool completely.

Run knife around edge of pan to release sides; cover and chill at least 4 hours. 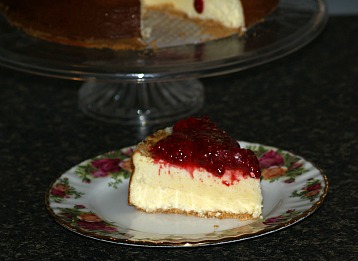 Bake shell 5 minutes longer; remove from oven and set aside.

FOR FILLING beat cream cheese, sugar and vanilla until smooth.

Stir jam; drizzle over the filling; cut through filling with knife to swirl jam.

Bake for 25 to 30 minutes or until center is almost set; cool on rack for 1 hour.

Place bowl WITH beaters in freezer until ice crystals form.

Beat with mixer until peaks form the consistency of whipped cream; refrigerate.

In another bowl dissolve gelatin in boiling water.

Beat the cream cheese with sugar and vanilla until smooth and creamy.

Stir the gelatin into cream cheese; fold in the whipped milk.

Combine juice and cornstarch in saucepan; cook and stir over low heat until thickened.

Cool sauce then stir in berries and chill; spread over cheesecake and refrigerate.

TO MAKE CRUST combine and mix baking mix, sugar and butter until crumbly.

FOR FILLING beat cream cheese and powdered sugar until smooth; set aside.

In another bowl beat whipping cream until stiff; fold into the cheese mixture.

Swirl HALF of the raspberries through the cream cheese mixture.

Cover and freeze until firm; stand at room temperature 15 minutes before cutting.

TO MAKE CRUST combine and mix the crumbs, sugar and butter.

Add cream cheese, sugar and salt to bowl; beat until smooth and light; set aside.

Beat egg WHITES in another bowl until stiff peaks form; set aside.

Beat the heavy cream until stiff; fold cream and egg whites into the cream cheese mixture.

Crush raspberries in blender to pulp; gently swirl HALF of pulp through cheese filling.

Using a knife swirl the pulp gently; place in freezer and freeze firmly.

Cover cheesecake with plastic wrap and return to freezer.

Remove from freezer 20 minutes before serving; makes 6 to 8 servings.